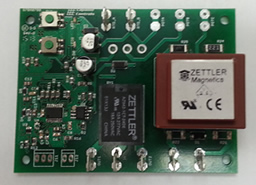 Set temperature set point to 350°F. Press switch #1 (outside switch) and hold for 3 seconds until both LEDs flash and then release the switch. If both LED`s flash 5 times this would indicate the control is now calibrated and the information was properly stored into memory.

Press and hold switch #2 (inside switch) for 3 seconds until the both LEDs flash and then release. If both LEDs flash multiple times this would indicate that the offset is set to 0°F (no offset). To add a positive offset simply press switch #1 (outside switch) once to increase the temperature +1.5°F. The LED will now turn on once then off indicating a 1 step offset. (This can go up to 10 steps +15-20°F). To do a negative offset simply hold down switch #2 (inside switch) for 3 seconds until both LEDs flash and then release. Then simple press the switch #2 as many steps as required (-1.5°F) per step. The LED #2 will turn on for as many steps as chosen. To increase or decrease steps simply add a step or remove a step by using the opposite switch. Example: If LED #1 flashes 3 times (3 step positive offset 3-4.5°F) and you want to change it to 2 steps simply press the Switch #2 Negative Offset (inside switch) once to remove a step. LED #1 will now flash 2 times on followed by a pause and will repeat this sequence until it times out.

Request a Quote on the Temperature Controls you need, or contact us to learn more.